Next steps for STPs and Accountable Care Systems

The traditional divide between primary care, community services, and hospitals – largely unaltered since the birth of the NHS – is increasingly a barrier to the personalised and coordinated health services patients need. Long term conditions are now a central task of the NHS; caring for these needs requires a partnership with patients over the long term rather than providing single, unconnected ‘episodes’ of care. Increasingly we need to manage systems – networks of care – not just organisations. Out-of-hospital care needs to become a much larger part of what the NHS does. And services need to be integrated around the patient.

To give life to this vision the FYFV argued for a new approach using five rules of thumb:

Across England, commissioners and providers across the NHS and local government need to work closely together – to improve the health and wellbeing of their local population and make best use of available funding. Services that are planned and provided by local government, including housing, leisure and transport as well and public health and social care, impact on the health and wellbeing of local people.  Addressing the wider determinants of health affects demand for primary and acute services. Equally, the demand for social care is affected by the availability and effectiveness of NHS services such as stroke rehabilitation and other primary and community services provided to people in their own homes and care homes. Local health and care systems only work smoothly and effectively to provide effective services and minimise delays when there are good relationships and clear joint plans in place locally.

One way in which this approach has been given expression is through the vanguard programme. Over the past 18-24 months fifty areas around England covering more than five million people have been working to redesign care.  They have focused on:

Compared to their 2014/15 baseline both PACS and MCP vanguards have seen lower growth in emergency hospital admissions and emergency inpatient bed days than the rest of England. Given sample sizes and duration it is important not to over-interpret the data currently available. However, comparing the most recent twelve months for which complete data are available (January-December 2016) with the twelve months prior to the vanguard funding commencing (the year to September 2015), per capita emergency admissions growth rates were: PACS vanguards 1.1%, MCP vanguards 1.9%, versus the non-vanguard rest of England which was 3.2%. 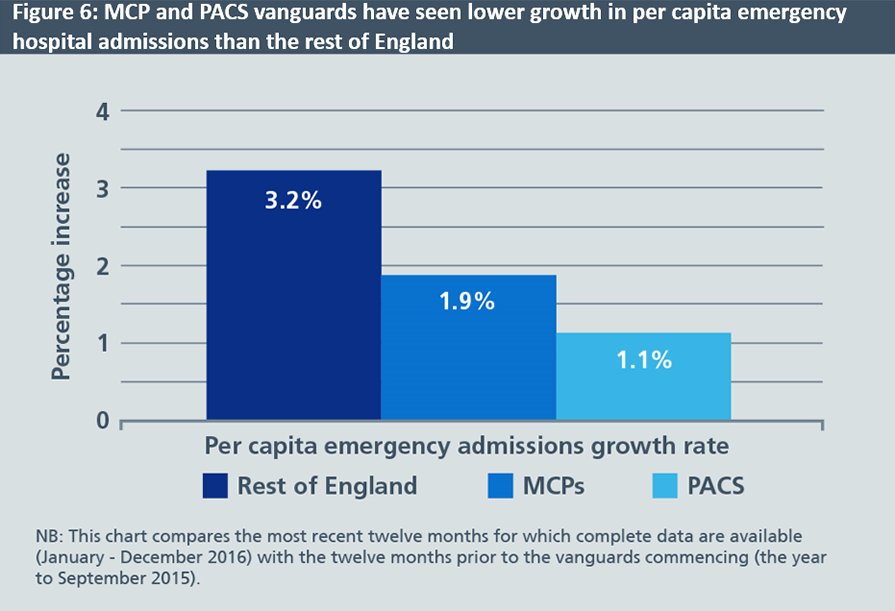 Our aim is to use the next several years to make the biggest national move to integrated care of any major western country. Why? As the CQC puts it:

“The NHS stands on a burning platform – the model of acute care that worked well when the NHS was established is no longer capable of delivering the care that today’s population needs… transformational change is possible, even in the most challenging of circumstances – we have witnessed it, and seen the evidence that it delivers improved care. As the boundaries between organisations and sectors become increasingly porous, peer review and transparency will become ever more important.”  Prof Sir Mike Richards (39)

This will take the form of Sustainability and Transformation Partnerships covering every area of England, and for some geographies the creation of integrated (or ‘accountable’) health systems.

STPs began life as pragmatic vehicles for enabling health and care organisations within an area to chart their own way to keeping people healthier for longer, improving care, reducing health inequalities and managing their money, working jointly on behalf of the people they serve. They are a means to an end, a mechanism for delivering the Forward View and the key national priorities in this Plan.

These partnerships are more than just the ‘wiring’ behind the scenes. They are a way of bringing together GPs, hospitals, mental health services and social care to keep people healthier for longer and integrate services around the patients who need it most. They are a forum in which health leaders can plan services that are safer and more effective because they link together hospitals so that staff and expertise are shared between them. At their best, they engage front-line clinicians in all settings to drive the real changes to the way care is delivered that they can see are needed and beneficial. And they are vehicles for making the most of each pound of public spending; for example, by sharing buildings or back office functions (40).

More fundamentally they require engaging with communities and patients in new ways.  In order to mobilise collective action on “health creation” and service redesign, we need to recognise that, as the Five Year Forward View argued:

“One of the great strengths of this country is that we have an NHS that – at its best – is ‘of the people, by the people and for the people’. Yet sometimes the health service has been prone to operating a ‘factory’ model of care and repair, with limited engagement with the wider community, a short-sighted approach to partnerships, and underdeveloped advocacy and action on the broader influencers of health and wellbeing. As a result we have not fully harnessed the renewable energy represented by patients and communities, or the potential positive health impacts of employers and national and local governments.”

In making this transition to population-based integrated health systems, the NHS will be guided by several principles building on those identified above:

“The government will not impose how the NHS and local government deliver this. The ways local areas integrate will be different, and some parts of the country are already demonstrating different approaches, which reflect models the government supports, including: Accountable Care Organisations such as the one being formed in Northumberland, to create a single partnership responsible for meeting all health and social care needs; devolution deals with places such as Greater Manchester which is joining up health and social care across a large urban area; and Lead Commissioners such as the NHS in North East Lincolnshire which is spending all health and social care funding under a single local plan.” (41)

Making progress on our priorities and addressing the challenges the NHS faces over the next two years cannot be done without genuine involvement of patients and communities. Nationally, we will continue to work with our partners, including patient groups and the voluntary sector, to make further progress on our key priorities.

Locally, we will work with patients and the public to identify innovative, effective and efficient ways of designing, delivering and joining up services. And by prioritising the needs of those who experience the poorest health outcomes, we will be better able to improve access to services, reduce health inequalities in our communities and make better use of resources.

Last year STPs produced and published initial ‘Mark 1’ proposals covering the next five years. Some of these contained suggestions for major changes in local services that require formal public consultation.  All of them require local engagement with patients, communities and staff.

Healthwatch has set out five steps to ensure local people have their say:

As STPs move from proposals to more concrete plans, we expect them to involve local people in what these plans are and how they will be implemented.

In addition, where significant hospital bed closures will result from proposed service reconfigurations, NHS England will in future require STPs to meet a ‘fifth’ new test in addition to the four existing ones put in place in 2010. Under those current rules, planned closures can only go ahead with support from GP commissioners, strengthened public and patient engagement, clear clinical evidence and assurances that they are consistent with patient choice.

From 1 April 2017, NHS organisations will also have to show that proposals for significant hospital bed closures, requiring formal public consultation, can meet one of three common sense conditions:

Hospitals will still have the freedom to flex their number of beds throughout the year to manage their budgets, and the responsibility to determine how many beds they can safely staff.

ACSs will be an ‘evolved’ version of an STP that is working as a locally integrated health system. They are systems in which NHS organisations (both commissioners and providers), often in partnership with local authorities, choose to take on clear collective responsibility for resources and population health. They provide joined up, better coordinated care.  In return they get far more control and freedom over the total operations of the health system in their area; and work closely with local government and other partners to keep people healthier for longer, and out of hospital. Specifically, ACSs are STPs – or groups of organisations within an STP sub-area – that can:

In return, the NHS national leadership bodies will offer ACSs:

This is a complex transition which requires careful management, including of the financial framework so as to create opportunity while also reducing instability and managing risk. That’s why ACSs require a staged implementation. This also provides the opportunity to prove their ability to manage demand in ways that other areas can subsequently adopt. We expect that candidates for ACS status to include successful vanguards, ‘devolution’ areas, and STPs that have been working towards the ACS goal. In Q1 2017/18, NHS England and NHS Improvement will jointly run a light-touch process to encourage other STPs (or coherent parts of STPs) to come forward as potential ACSs and to confirm this list.  Likely candidates include:

In time some ACSs may lead to the establishment of an accountable care organisation. This is where the commissioners in that area have a contract with a single organisation for the great majority of health and care services and for population health in the area. A few areas (particularly some of the MCP and PACS vanguards) in England are on the road to establishing an ACO, but this takes several years. The complexity of the procurement process needed, and the requirements for systematic evaluation and management of risk, means they will not be the focus of activity in most areas over the next few years.

40. As they think about how to develop their local health and care systems, STPs will want to take account of wider social, economic and environmental benefits of the sort referenced in the Social Value Act.