The NHS is supporting May Measurement Month and World Hypertension Day, urging people to get their blood pressure checked.

Speaking about the importance of knowing your numbers, 51-year old Alan Pearson from Nottingham, shares his story of suffering a heart attack in early January 2019.

Alan said, “Just before my heart attack, I’d been going through a really stressful time: my father hadn’t been well, which had a big impact on me; I had a demanding job and although I’d stopped powerlifting competitively when I was 40, I had kept up some unhealthy eating habits.

“I first realised I was becoming unwell in January 2019 when I started to feel funny: I walked into work and felt a strange sensation in my chest that stopped me in my tracks one afternoon. I started to get what I thought was really severe heartburn which developed over the course of a few days before I started to feel discomfort really deep in my chest. I assumed it was just indigestion and never thought it was my heart, so I was just taking over-the-counter medicine to treat it. 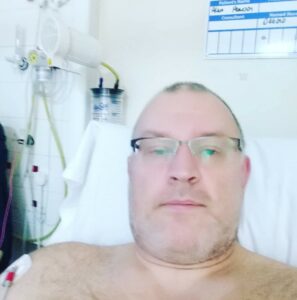 “I remember feeling uncomfortable in my chest on a 10-minute walk with my wife to a medical appointment. I sat outside in the waiting room and the medics actually called my wife out of her appointment because I looked so unwell.”

Alan still did not understand the severity of what had happened until he walked into the Queens Medical Centre to find out why he was feeling unwell.

“I walked into Nottingham’s Queens Medical Centre without knowing what was wrong and just told the lady on reception what I was feeling. I got checked out and my blood pressure and the ECG were both coming back fine, but the doctor who treated me sat me down, talked through my symptoms and eventually referred me to a cardiologist for more tests that afternoon. They sat me down and I’ll always remember them telling me: ‘You are having a heart attack.’

“The doctors had found an abnormality with my blood where the Troponin enzyme in my blood that should be between zero and 30 was reading actually reading 10,000! I was put in an ambulance and rushed to the acute cardiac ward at Nottingham’s City Hospital to have heart surgery the following day.

““I went down to surgery the following morning with my family around me and the surgeons found that I had a 99% blockage in one of my arteries. I had two stents fitted to help keep the arteries open and, when I came out of surgery, my dad told me that I’d completely changed colour – I’d gone from looking grey before the surgery to almost instantly looking flush with colour now the blood was pumping well.

“I’m now back under the care of my GP who tells me how lucky I was that I went to hospital when I did – otherwise I may not have been able to walk into the hospital like I did that day. I’ve been told that I’ve been saved rather than fixed, but that I now have as mu 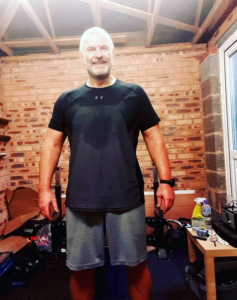 Speaking about what happened after the surgery, Alan said, “Knowing your numbers might just save your life: I’ve invested in a home blood pressure monitor so that I can keep a better eye on my health and I know I can just speak to my local GP practice whenever anything looks out of the ordinary.

“I was convinced I wouldn’t make 50 after my heart incident, but I’m 51 now and am eating more healthily and am continuing to train, but I’m doing that now for my health and longevity now rather than to get bigger and stronger for its own sake.”

He goes on to say, “I want to say how grateful I am for what the NHS did for me: the NHS saved my life.

“The doctors, nurses and other staff working in Nottingham on 24 January 2019 took the time to understand me when I knew something wasn’t right. They took the stress out of the situation in how they dealt with me and their kindness and honesty matters so much to me.”

As part of May Measurement Month the NHS is urging over 40’s to get their blood pressure checked at local pharmacies without an appointment, or at home, to know your numbers.