The NHS is supporting May Measurement Month and World Hypertension Day, urging people to get their blood pressure checked.

This month brought back some raw and recent memories to 42-year old Chris Wood from Sutton Coldfield, who suffered a heart attack last August.

Chris said, “I was in the garden and felt like I was about the pass out, but I had no chest pains and no indication it was my heart. I phoned NHS111 on the Tuesday afternoon after going through what I now realise were classic symptoms of a heart attack and they sent me an ambulance, which arrived within minutes.

“I had not had the stereotypical image on TV of someone clutching their chest in agony and immediately knowing it was a heart attack. 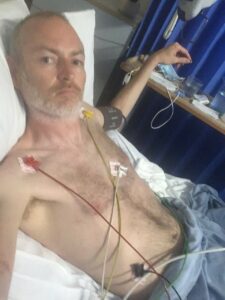 “For a few days before I had experienced what I thought was heartburn and indigestion, then on Monday night I assumed I had COVID after I had hot sweats, violent sickness, dizziness, numb jaw and tingly fingers.”

Chris still did not understand the severity of what had happened until he had blood tests while he was in Good Hope Hospital (part of University Hospitals Birmingham) which showed that he had suffered a heart attack and was immediately transferred to the Coronary Care Unit, where he was treated and his condition was stabilised.

“The following morning, I was blue-lighted at what felt like 100 miles an hour to Heartlands Hospital where I was prepared for surgery to unblock my arteries and I had a double stent fitted. It was 99% blocked so the amazing consultant was fortunate to re-open it.

“I later found out that, as with many heart attacks and starvation of oxygen, my heart is permanently damaged and I will likely be on medication for the rest of my life.

“I am, however, alive and have a second chance: I was extremely lucky.

“I thought I was fit, healthy and I exercised regularly. I never thought at my age I had even the slightest risk or thought of a heart attack. It was, and still is, a massive shock and I am still coming to terms with, as is my family.

“I did not see or understand the symptoms. I would never have phoned 999. I questioned the ambulance crew’s

advice to go to A&E. I thought I was going to walk out of A&E having wasted their time with a packet of Rennies. These people saved my life, without a doubt. I was one of the 70% of heart attack victim survivors.

“This is my plea to encourage people to learn and recognise the signs and don’t feel calling 999 is the wrong thing to do – it might just save your life!

“This is not just something that happens to older people; I am not old. I have found during my rehabilitation and recovery there are a great many people out there the same as me – hundreds and hundreds – and they have been a great source of support and advice.”

As part of May Measurement Month the NHS is urging over 40’s to get their blood pressure checked at local pharmacies without an appointment, or at home, to know your numbers.