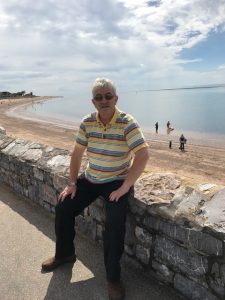 People in Yorkshire and the Humber are being urged to eat healthily and be more active to help reduce their risk of type 2 diabetes during Diabetes Prevention Week (16-22 April 2018).

Arthur is 66 years old from Keelby in Grimsby and retired from a long managerial career within the bus and coach industry culminating in owning his own bus and coach company.

He was identified as being pre diabetic as part of routine blood testing for diabetes and was asked if he wanted to attend a course and be part of the National Diabetes Prevention Programme (NDPP).

He had been having regular blood tests and was told that the blood sugar readings were becoming higher than perhaps healthy, so even though it wasn’t a total surprise, it was still a shock for Arthur to have it confirmed that he was so close to being diabetic.

The programme provides advice on eating healthily, being more active and losing weight. A lack of exercise, poor diet and being overweight are all risk factors for developing the Type 2 diabetes.

Arthur’s wife Carol, was encouraged to attend the course with Arthur, so they could both learn how to alter cooking and eating habits and lifestyle changes.  Arthur explained “I couldn’t have done it without Carol; it wouldn’t have been as effective, as she was really supportive and encouraging throughout all the sessions. “There are major lifestyles changes to make and doing the course together as a team and understanding the advice and implementing it was made easier with her there.”

Arthur is now urging others in Yorkshire and the Humber to check whether they may be at risk of the disease and take action on improving their own health. At the start of the course his blood reading was 45 – well within the pre-diabetic range,  and at the end of the course it was 36 well outside the range.

He said:  “The course is excellent and if they can get sceptical people like me onto the course and make them change their lifestyles it’s a great programme and will save lives and money in not having to treat diabetes in the long term. You’ve just got to get people committing to the 9 months, as it sounds rather daunting at first but once you get past this then the benefits far outweigh the effort required.”

“I am retired now and have more time to think about and prepare my meals and do the much needed exercise and can see it would be harder for people working.  I put up my own barriers to the course and would encourage others to be open to learning about the dangers of diabetes and improving their health and commit to the course and take the offer of help and support because if someone wants to avoid becoming diabetic then this is their opportunity.”

Nationally, diabetes and its complications cost over £6 billion every year to treat and one in six patients in hospital has diabetes. Around nine out of 10 people with diabetes have Type 2 diabetes which is closely linked to obesity and yet is largely preventable by making simple lifestyle changes around diet, activity levels and weight management.

GPs and other healthcare professionals in Yorkshire & the Humber are using Diabetes Prevention Week, which starts today, to urge residents to find out if they are at risk and take action to improve their future health.

You can check to see if you are at risk of type 2 diabetes at diabetes.org.uk/risk.