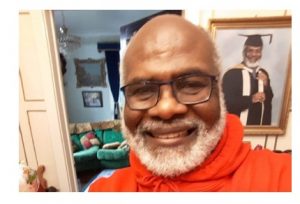 People finishing the world leading NHS Diabetes Prevention Programme in the West Midlands have lost the equivalent weight of two and a half ambulances.

One of those helping to contribute is 70 year-old Herman Wheeler from Handsworth Wood near Birmingham who has already lost more than 6kg of weight having been a member of the programme for just three months.

Herman, who is a retired psychology, medical law and ethics lecturer has found adapting his favourite Jamaican recipes to be a key ingredient in his fight against developing Type 2 diabetes.

“I’m absolutely determined to enjoy my five year old son growing up and live well into my 90s,” said Herman, who previously lectured at Birmingham University. “The Diabetes Prevention Programme has been brilliant at reminding me and informing me of sensible food choices and where easy swaps can be made.”

Herman was diagnosed with a high blood sugar level in the late summer and is attending an NHS  Healthier You Diabetes Prevention Programme at Lozells Methodist Centre. He credits the programme for making him much more conscious of diet and exercise.

“One of my favourite dishes is an authentic Jamaican breakfast called mackerel rundown, made with coconut oil. I hadn’t realised the hidden saturated fat in it and have simply reduced or swapped certain oils in my cooking. I’ve refreshed my understanding of eating lots of vegetables and the group is super for sharing food swap ideas and where to find healthy alternatives.”

If you are Chinese, South Asian, African-Caribbean or Black African the risks are greater for you getting Type 2 diabetes. However, this can be reduced by losing weight where appropriate, increasing physical activity and improving diet.