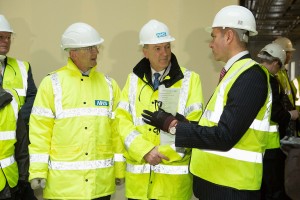 NHS Medical Director, Sir Bruce Keogh has given his seal of approval to the first hospital in the country dedicated to providing emergency care every day of the week.

Due to open in 2015, Northumbria Specialist Emergency Care Hospital in Cramlington will have specialist emergency care consultants working round the clock to provide care for the 500,000 people of North Tyneside and Northumberland.

Performing a topping out ceremony by sealing the roof of the new facility, Sir Bruce said: “This represents a significant step towards achieving the highest standards in patient care. The new hospital here at Cramlington adds momentum to our plans to make a fundamental shift in the provision of urgent care.”

Sir Bruce published a blueprint last year to reform urgent care proposing Major Emergency Centres as part of the solution with an expectation that there will be 40-70 centres across the country. With its dedicated facilities, Northumbria, has the aspiration to become one of the first major emergency centres in the country where seriously ill patients will be seen by an A&E consultant when they arrive at the hospital and then by a specialist in their condition. Locating diagnostics within the emergency care department will allow consultants to get test results quickly so they can start treating patients earlier.

Sir Bruce commented that “Separating emergency care in this way will also benefit patients attending Northumbria’s general hospitals for planned operations and tests. NHS England is the only healthcare system in the world that is trying to sort out the issue of seven day services. Individual hospitals have done some work on it, but never a national health service. Putting the next foot forward now is to ensure that other Trusts follow Northumbria’s lead.”