An NHS111 call handler has been praised for her work as part of International Women’s Day. 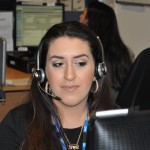 Noor Rahim, who works at LCW in north-west London – one of the country’s busiest NHS111 call centres – has been publicly thanked for her prompt action in helping a woman who was in agonising pain.

Noor quickly realised there was a serious problem when the woman called to say she had been told by her GP to rest and take paracetamol.

“I could tell she was in a great deal of pain from the way she was breathing,” explained Noor, who quickly realised from the caller’s explanation that she needed an ambulance immediately.

As with most calls, Noor dealt with the emergency last November and never heard the outcome of her actions. That is, until LCW was contacted by NHS England in response to an inquiry from The Guardian.

As part of its coverage for International Women’s Day on March 8 the newspaper invited women readers to pay tribute to other women for their help and support.

Noor’s caller contacted the paper because she wanted to say thank you to the nameless voice she heard that day when she rang NHS 111. She said that but for Noor’s prompt reactions to her pleas for help “I may not be standing here today.”

After watching a film of the caller publicly thanking her, Noor said: “I felt so many emotions all at once. Putting a face to the voice and hearing her be so open and willing to tell her personal and traumatic story was incredibly moving.

“When she looked directly at the camera and thanked me so genuinely, it was just so rewarding.

“Hearing her say ‘I might not be standing here today’ had it not been for my actions made every single call I’ve ever taken so worthwhile. I am proud to work for LCW and NHS111.  And of course, seeing her look so well was the icing on the cake.”

Noor, who has been a call handler at LCW for 16 months, added: “As I went through all the interview processes, training and exams I really began to feel like I belonged and wanted to make a difference. Especially having had family members go through rough patches with their health, this made me want to learn more and be able to help other people and their families.”

Recognition of Noor’s work comes at the end of a winter that saw NHS111 around the country handle around 4.6 million calls – around one million more than last winter.

Indeed, December was the busiest month in the history of NHS111 that saw calls peak over Christmas, and in the week up to December 28 saw the service receive 439,000 calls nationally.

Noor and her colleagues at LCW dealt with more than 40,300 calls alone in December, and almost 13,000 between Christmas Eve and New Year’s Day.

Dr Ossie Rawstorne, National Medical Adviser to NHS111, said: “This is not just recognition of Noor’s excellent work, it is also a fantastic reflection on her colleagues at LCW and those people working for NHS111 as a whole.

“The service has come under unprecedented pressure this winter and has done a fantastic job in coping with increased demand. It has taken the pressure off A&E and 999 ambulance services by directing hundreds of thousands of people to the right place for their treatment and care.”

“Noor and her colleagues throughout the country can be very proud of the work they do day in and day out.”