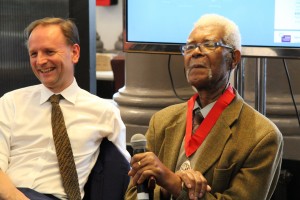 NHS England hosted its first event last week at St Thomas’ Hospital in celebration of the passengers of the SS Empire Windrush and their contribution and legacy to the NHS workforce that we have today.

Sam King, survivor of the Windrush, was guest of honour in the celebrations. Sam was joined by six current and retired NHS staff – Nola Ishmael, Phil Sealy, Elizabeth Aniwonwu, Prof Frank Chinegwundoh, Tereza Kaplanova and Dr Rupal Shah, who reflected on their experiences of working in the NHS.

The event was chaired by Patrick Vernon, member of the NHS Equality and Diversity Council, with speeches from our Chief Executive, Simon Stevens and Chief Nursing Officer, Jane Cummings.

The arrival of the Windrush helped to mark a new chapter in both the birth of our NHS and the growth of multicultural Britain. However seven decades later our black and ethnic minorities are still under-represented at senior levels in the NHS workforce. This event provided NHS England with an opportunity to examine the challenges we currently face to address this, as well as highlighting the progress that we are making on this important agenda.

Simon Stevens was visibly moved when he described the event as “a celebration of the contribution of 200 nationalities and more to the NHS.” He also described the NHS Workforce Race Equality Standard as “a shared commitment to tackle the different experiences of BME staff.”

Dr Habib Naqvi, NHS England’s Equality Lead was delighted with the huge turnout. “It was a true celebration. People stayed way beyond the 7pm finish to share stories and discuss experiences. Baroness Howells, Lord Crisp and Roger Kline joined current and past NHS staff who turned out to listen to Sam King and celebrate those who arrived from Jamaica on Empire Windrush and their contribution to the NHS.”

Jane Cummings, Chief Nursing Officer, closing the event, committed to continue to work and improve the opportunities for BME people in the NHS.