Dr Kate Granger has revealed how she thought her #hellomynameis campaign would amount to “one or two tweets”.

Her compassionate care crusade has since turned into a global phenomenon and is followed by 38,000 people around the world, with #hellomynameis receiving more than 800 million Twitter impressions. The hellomynameis.org.uk website gets around 100 hits per day. 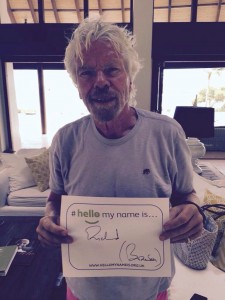 Virgin empire mogul Richard Branson is just the latest in a host of stars, celebrities and influential people to support her.

The campaign has since led directly to the Kate Granger Compassionate Care Awards which will be presented by Kate for the second successive year at Expo 2015 being staged at Manchester Central next week.

And Expo has just given the campaign yet another boost with #hellomynameis featuring prominently on every delegate badge. It means that more than 5,000 people attending each of the two days of the event will be sporting the campaign brand.

Kate was stunned by the news, saying: “I am absolutely delighted to see the #hellomynameis logo will be on every delegate badge at NHS Expo 2015. This will be an amazing opportunity to reach thousands of frontline staff with the campaign.”

Kate, 33, who has terminal cancer, explained how the campaign was launched at the end of August 2013 as a direct result of her moaning to her husband, Chris Pointon, about the lack of compassion being shown by staff during her care.

He told her to stop whinging and to do something positive about it. In that instant the #hellomynameis campaign was born.

“I was being treated for an infection,” she explained. “That experience was difficult as there had been a fair few problems with my care. But the thing that I noticed most was that people weren’t introducing themselves to me before they did things to me.

“I was just expected to put my arm out to have my blood pressure taken by this anonymous person I’d barely had any communication with. Then someone would come along and give me antibiotics and not speak to me. Even the consultant on the ward round assumed I knew who he was. He should have at least introduced himself.

“I’ve always been a keen observer of my healthcare,” added Kate, who is in her tenth year as a doctor and is Acting Consultant for Medicine for Older People at Pinderfields Hospital in Wakefield. “I’ve written about it, reflected on it and really thought about what constitutes good care and how I can make the care I deliver as a doctor better by using my own experiences of being a patient.

“This lack of introductions from people who were treating me seemed so basically wrong and I wondered how we could have lost that from health care? How can we have got to a point where we don’t see patients in beds as people anymore? So much so that we don’t even give them the common courtesies that we would if we met someone in the street?

“Being passionate about health care, communication and how we deliver care, I discussed this with Chris during visiting time. He told me to stop whinging and do something about it.

“That led to my first #hellomynameis tweet which said that I was going to start the campaign and Chris neatly packaged the idea into the hashtag. You need a catchy hashtag if you are going to have a social media campaign that works. And off we went on what has been a remarkable journey.”

A broad smile breaks out across her face and Kate laughs as she recalls: “I thought I’d just send a few tweets and maybe a blog, and that people would discuss it for a little while and then it would peter out. I never expected that two years later we would have a full blown, global social media campaign on our hands.”

As the campaign gathered momentum in came to the attention of a number of leading politicians, stars and celebrities who threw their weight behind it.

“We’ve had backing from a number of well-known people who sent messages of support,” added Kate. “But those that stand out come from people who have said: ‘I’ve had a really good hellomynameis experience today and it made a real difference to me. Thank you’. Those are the messages that mean the most to me.”

Chris adds: “I’ve managed to get important people to either support Kate, or to have their photos taken with the #hellomynameis sign. They may not be medical but they are influential and respected in their field and it’s not just in hospital that this campaign needs to be used, it’s in all walks of life.”

But the name that stands out above all others for Kate and Chris is that of chef Michel Roux junior, not least of all for his continued support and kindness, the cards of support he has sent when Kate has been at a low ebb, but also because he gave her a personal lesson in how to make brioche.

However, Kate, who collected her MBE for “services to health care” at Buckingham Palace in June, explained that its far from being about the star names, adding: “The messages that stand out to me are those from relatives or patients who tweet me and say they have had a really good #hellomynameis experience today and it made a difference to me, thank you. They are the messages that mean the most.”

She hopes the campaign will keep going long after she has gone, saying: “#hellomynameis isn’t just about introducing yourself to your patients, it’s about see the person behind the condition, treating them as a person with their own priorities, fears and anxieties. And really understanding them and treating them as you would if they were a member of your own family.

Video interview with Kate and her husband Chris Pointon talking about the #hellomynameis campaign.