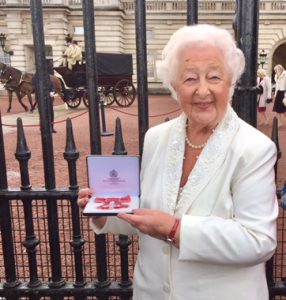 Ethel Armstrong, 87, who was a nurse cadet on the first day of the NHS in 1948, today received an MBE from HRH The Prince of Wales.

Ethel was recognised in the Queen’s New Year Honours for her seven decades of dedicated service to the NHS workforce and for her involvement in the NHS retirement charity.

Ethel was working as a cadet nurse on the day the NHS was established in July 1948. She went on to work in various parts of the country, mainly in radiography and radiotherapy roles, including for the Breast Screening Service in Liverpool ahead of her retirement in 1987.

Ethel Armstrong MBE said: “I am completely bowled over to have been recognised by Her Majesty the Queen for my work for the NHS. I never expected to receive such a prestigious accolade for doing something I love.

“The NHS is part of who I am, and I have been proud and lucky enough to have been there at the start of this wonderful institution. It’s a particular honour to receive this in the year that the NHS turns 70 and I see this as a nod to all the special people I’ve had the privilege of working for over the decades.”

“Huge congratulations to Ethel on this well-deserved public recognition of her inspiring career and public service. In the year that the NHS turns 70, it is fitting that we pay tribute and say thank you to the extraordinary people like Ethel who go the extra mile, year in, year out to provide patient care and truly make a difference.”

After retirement, Ethel joined the Durham branch of the NHS Retirement Fellowship and quickly became an integral part of the branch. She served as welfare officer in 1992 before becoming Chairman in 1994 – a position she still holds. In 2005, Ethel was elected as the regional representative for the North East and became part of the National Council. She was elected vice-Chairman in 2009, Chairman in 2011 and President in 2013 and from 2015 is a life Patron.

John Rostill OBE, Chief Executive of the NHS Retirement Fellowship said: “This remarkable lady has worked tirelessly for the benefit of our 10,000 members and has travelled thousands of miles by train each year to enthuse members with her passion, enthusiasm and commitment. This 87 year old lady is unique, and has set an example that will be difficult to replicate. I can’t think of anyone more suitable to be honoured, at the beginning of the NHS Retirement Fellowship’s 40th year and the NHS’s 70th birthday.”