A Children’s Nurse at Rainbows Hospice has created a new service to help and support families across the East Midlands region who experience the death of a baby before, during or shortly after birth – forging links across services and raising the awareness of the end-of-life-care services available from Rainbows.

Following a successful pilot project, a Children’s Nurse at Rainbow’s Children’s Hospice, developed the Neonatal Link Nurse role – which has already received 40 referrals in the first 12 months (to December 2017) across the East Midlands. Close collaboration has been established with several of the hospitals across the East Midlands, including University Hospitals of Leicester NHS Trust.

Loughborough-based Rainbows is a hospice for children and young people providing care, symptom management and short breaks for children from across the East Midlands with life-limiting and life-threatening conditions.

Rainbows had identified that it was receiving very few neonatal referrals, recognising significant unwarranted variation in the signposting to available resources and support that the hospice can provide to a family.

There were 1,855 neonatal deaths (deaths under 28 days) registered in England during 2016.

The hospice wanted to inform more families of babies with palliative care needs of the valuable services available, to increase their support options.

As part of a pilot, a Registered Nurse (RN) was employed to work 15 hours per month as a neonatal link alongside the Paediatric Nurse role. The RN began to visit other hospices, to see how a neonatal service had developed successfully elsewhere in the UK and to identify the liaison and signposting that was done in other places to enhance the information shared with families needing support.

The neonatal link RN also made contact with 11 local neonatal units from which it was identified that referrals to Rainbows were most likely to come. Information was given about the hospice and a request made for any ideas on how the service might develop. Nine units responded and as a result, a detailed presentation was given at a clinical forum, which was then made available with associated materials, to raise awareness about the hospice services and as a referral resource.

Following evidence of an increase in neonatal referrals, the link nursing role has since been made permanent, and has supported an increase in involvement with regional perinatal/new-born networks, working towards a regional pathway for neonates with palliative care needs.

The pathway for the unborn child or neonate with a life-limiting condition is in the final stages of consultation using the evidence of the success of this pilot having been officially launched in April 2018. The pathway will ensure a more equitable service is offered in local hospitals. It will give all families the opportunity to meet a member of the hospice team, and to have options with regards to their care and support. 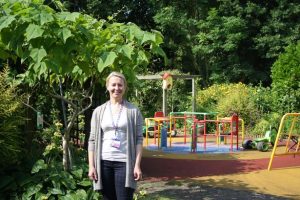