The last few months have been a rollercoaster ride. We have seen NHS Commissioning Board (NHS CB) roles on structure charts become real people – for example, the Director of Patient and Public Voice and Information has become Giles Wilmore; the Patient and Information CCG Lay Assessors hotline has become Sian; and the CCG Lay Assessors themselves have become Ghzala, Huw, Madeleine…

New voices in the room are resulting in new exciting, yet testing discussions. These amazing people are breathing life into ideas, processes, systems; they are beginning to challenge what has happened already and are starting to carve out and shape the future.

In the midst of this frantic period at the NHS CB, one of the fantastic people working at the Board sent me a link to the Radio 4 programme Four Thought. She gifted me a powerful story, written and read by Christina Patterson. To cut to the chase, it’s a poignant story of how the system has become, in many ways, more dominant than the people it is delivered by and for whom it exists – and how we all have an individual responsibility for our words, our actions, our relationship with others whether it be in our personal or working life. This really resonated with me!

In my opinion, whilst a system is helpful, surely people – no matter what their role – should always be put before the system. The journey of participation, on which we are taking the first wobbly steps, is truly based on this principle.

In the last few weeks, I’ve heard two key questions being asked: Can you briefly explain this ‘participation’ approach; and what is the rationale and evidence behind it?

There is a huge and growing body of evidence relating to ‘participation’ or the other names used, such as co-production, public and patient voice, involvement or engagement. Each of these are often defined in certain ways, eg the well-known Arnstein’s Ladder.

We could look at it in a slightly different way using the unsung hero of health based theories and research – salutogenesis. This amazing research-based theory, led originally by Antonovsky in the 1970’s, is a strength-based approach which explores why some people are able to stay well despite hardships and stress. The conclusion is that some people have a greater ‘sense of coherence’, ie a sense of control, positive outlook and ability to use internal and external resources. As common sense and now evidence tells us, with this ’sense of coherence’ comes better quality of life and health outcomes.

There have been many incredible research studies, action learning programmes and the like which have focused on different aspects under the umbrella of salutogenesis including empowerment (eg Community Health Champions), self-efficacy (eg Family Nurse Partnership) and co-production (eg NESTA) and many more.

The model of participation below is an early attempt to bring all of this learning together into an-easy to-understand model, which is really a hypothesis of the potential if we should move from piecemeal innovation to the tipping point of a social movement.

Just to be clear, this model is not NHS CB policy. It is simply a convergence of ideas, a frame to help us connect individuals and organisations with a shared purpose around building a new powerful relationship between people and their own health and the health system.

Using a real life case study to explain this model, Altogether Better used a model of empowerment which incorporated increasing confidence, knowledge, connections and challenging current cultures and behaviours. The resulting evidence suggests that this approach facilitates individuals to become more empowered, leading to increased civic participation, improved health outcomes and a more productive and better utilised health system. Altogether Better built and tested this model with over 20,000 workplace and community health champions who supported over 100,000 people in their communities. 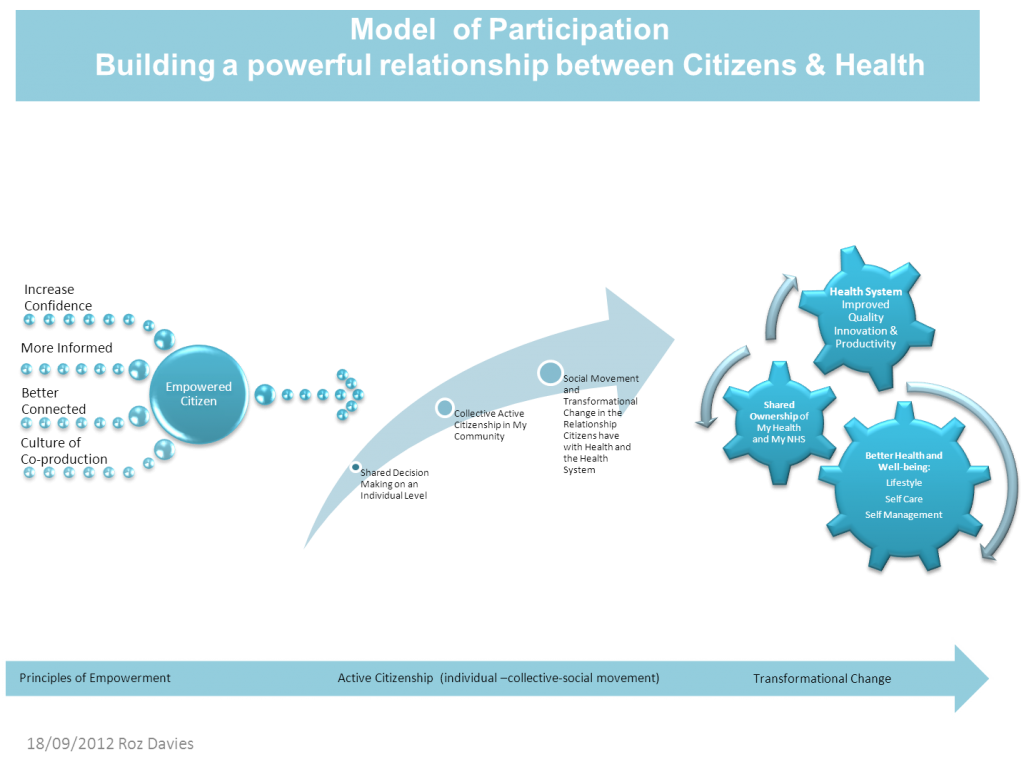 In the past few weeks I have heard the commitment and passion for this agenda from many sources including CCG Lay Assessors, other active citizens, pioneer leaders of CCGs, academics, staff across the NHS CB – as well as from many of the experts in the various approaches to participation we have in England and beyond.

Twitter is becoming a huge source of information and inspiration in this area. See @jeremytaylorNV and @GBDOC to name but a few champions for active citizenship and participation, or follow some of the #conversations such as #nhsconstitution to listen to interesting discussions.

People, no matter what role they are playing, are talking a passionate language with real integrity of purpose, soul food indeed!

Comments on this page are now closed.

Occasionally we invite guest bloggers to write posts for NHS England. Those posts are marked as authored by “Guest blogs”.