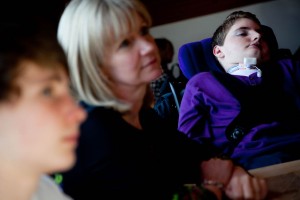 In a moving and intensely personal blog, mother Jo Fitzgerald explains how a personal health budget helped build relationships with healthcare professionals that enabled her severely disabled son Mitchell to not only lead a good life, but also experience a good death:

A few weeks ago my beautiful, precious son died; it was perfect.

That may sound like a strange thing to say, but Mitchell was born with a profound disability and complex health needs. We’d always known he wouldn’t live a long life, but now that he has died I am comforted by the fact that not only did he live a good life, he also experienced a good death.

He died in my arms: comfortable, unafraid and surrounded by family and familiar things.

Whilst it is challenging to parent a child with a tenuous hold on life, knowing their condition is life limiting enables you to anticipate the road ahead. It brings the reality of death into sharp relief, which is harsh and frightening but, at the same time, creates an opportunity to think about the end of life in a way that isn’t always possible.

Most people don’t get the chance to say their ‘goodbyes’ in a planned and thought through way so I am grateful that we were able to write a dignified and compassionate ending to Mitchell’s life story with the help of doctors and nurses who we respected and trusted.

We were one of the first families in England to have a personal health budget, and the increased flexibility and control this gave us made a massive contribution to enabling Mitchell to live at home and lead a full life.

However, as I’ve said many times before, personal health budgets are not all about the money. It’s about changing the relationship between people and health professionals: having different conversations, building mutual trust and asking questions to understand what really matters to people.

Mitchell’s health had been deteriorating for months, and after 11 admissions to ICU it became apparent that he was nearing the end of his life. It’s customary for relatives of patients on ICU to have what is often referred to as ‘the talk’!  It’s a conversation with doctors to explore the situation and how likely it is that their relative will recover.

We had deferred this particular conversation many times before but on this occasion, we knew that Mitchell was in a critical situation. As you’d imagine, it was a difficult conversation. So much about death can be scary and unknown, but it was also a good conversation. With hindsight, I also realise that it was the culmination of many more ‘good’ conversations.

Over the previous 18 months, the ICU team had worked with us in a truly person-centred way. Each ICU admission had involved teamwork, shared decision-making and a central focus on Mitchell’s quality of life.

When we entered into ‘the talk’, we were encouraged to ask whatever we needed to know about the process of dying and how that would be managed.

We also wanted to share what mattered most to us. We wanted to wash and dress Mitchell as we’d always done and we wanted to continue to perform all the nursing tasks that had become second nature to us. We wanted to hold Mitchell’s hand throughout the process so at no point would we feel he was being taken away from us simply because he was nearing the critical end stage of his life.

We had open and frank discussions with the ICU staff, which meant we made key choices about how we wanted Mitchell’s death to be. They even respected my wish that he didn’t go to the mortuary alone; he was taken down on his own bed with his own blankets and we stayed with him until the funeral directors arrived.

I’ve learnt that grief is often complicated by other factors such as shock, feelings of regret and a profound loss of control. The process we experienced has gone a long way to mitigating those feelings. We weren’t shocked at any point because we knew what was happening. We have no regrets because we knew we’d done everything we could possibly do to give him a good life and to surround him with love. We cared for him ourselves right through the process of his death which meant we were close to him and have no regrets about what happened.

People’s experience of death is individual and unpredictable but, as much as anyone can be, we felt in control of everything that happened in those last few hours. This says a lot about the ICU team and their values and philosophy. Having choice and control made the experience a positive rather than a negative one; this was largely down to the staff’s ability to be open, pragmatic and to put Mitchell at the centre of decision-making.

Whilst it wasn’t the personal health budget itself that made this easier, the ongoing process of developing a care plan centred around us and the positive, trusting relationship this enabled us to develop with the fantastic team at the Royal Blackburn Hospital really did make the difference.

And while I’m missing Mitchell every minute of every day and think about him all the time, the way his death unfolded means I’m at peace with what’s happened. I’ve gently laid my son to rest and feel calm knowing that he’s finally safe.

It feels important to share this last chapter in Mitchell’s story because I now realise that having choice and control in life and death is equally important.

Before Mitchell’s death I wasn’t sure I’d feel able to continue working as the Director of Peoplehub, but now I’m more determined than ever. These past few weeks have shown me what a huge difference it makes for care planning to be a continually evolving process that is centred around people, their families and what matters most to them at every stage of life. I know Mitchell is with me every step of the way…

Jo Fitzgerald is the Lived Experience Lead for the Personalised Care Group at NHS England.

Her role recognises the importance of co-producing and co-designing personalised care and raising the voice of people with lived experience at a national, regional and local level.

Jo’s life was profoundly transformed when her eldest son, Mitchell, was born in 1992 with a severe learning disability and complex health needs. The experience of being Mitchell’s mum has largely influenced the direction of her life; it has shaped her beliefs, values and life choices.

Mitchell became one of the first people in England to have a personal health budget which enabled him to live at home and lead a full life until his death in March, 2015.

Jo is a qualified counsellor and was awarded an MA with distinction from the University of Manchester in 2008.