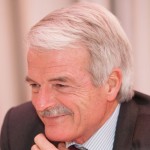 Professor Sir Malcolm Grant has been re-appointed as Chair of NHS England.

Sir Malcolm, who originally took up the post in 2011 as founding chairman of the NHS Commissioning Board which subsequently changed its name to NHS England in 2013, will continue in his role from the end of October for another three years.

He said: “I’m delighted to have been invited to serve a second term. We now have an exceptionally strong Board for NHS England and great executive leadership, all focused on delivering the transformation proposed in the NHS Five Year Forward View.”

NHS England’s current Deputy Chair, Ed Smith, is stepping down following his appointment as the joint chair of Monitor and chair-designate of the NHS Trust Development Authority (TDA). The new jointly-led Monitor and TDA will be called NHS Improvement.

Sir Malcolm is a barrister and a member of the Bench of Middle Temple.

As an academic lawyer he specialised in planning, property and environmental law, and was Professor of Land Economy at Cambridge from 1991-2003.

From 2003-2013 he was the President and Provost of UCL (University College London).

He has served as Chair of the Local Government Commission for England, of the Agriculture and Environmental Biotechnology Commission and the Russell Group.

He is currently a trustee of Somerset House, a director of Genomics England Ltd; a board member of the University Grants Committee of Hong Kong; and a UK Business Ambassador. He is Chancellor-Elect of the University of York.