Dementia is the most feared illness in people over the age of the age 50 and we know there is a significant stigma associated with the condition.

Creating Dementia friends was the response to this as part of the Prime Minister’s Challenge on dementia and there is an aspiration that there are one million dementia friends by March 2015 (see dementiafriends.org.uk for more details).

We know that a diagnosis of dementia can have a profoundly negative effect on a person and their interactions with others. Surveys from the Alzheimer’s Society, for example, show that nearly half of people with dementia feel they are a burden to their families, 40 per cent say they have lost friends and nearly 80 per cent of people with dementia feel anxious or depressed, while nearly two thirds feel lonely.

All across the country dementia friends sessions, run by dementia champions, are disseminating awareness about dementia. Largely that it’s not part of normal ageing, it is caused by brain diseases such as Alzheimer’s disease, and there is more to the person than dementia and that dementia is more than memory problems. Most importantly, they are getting the message across that you can live well with dementia.

This is one way in which the stigma around dementia will be lessened, and people will feel confident about asking for help and not being embarrassed about their memory.

Last month, it was a privilege for me to visit Eccles in Salford, Greater Manchester, to meet Tony and Joy Watson. Joy has had a diagnosis of dementia and has decided to transform the environment around Eccles and, in particular, in the businesses in the town centre.

It started with a meeting in Eccles where most of the businesses signed up. Joy and Tony provided them with information including a guide to dementia and a sticker for the window to show the shop is dementia friendly.

I was pleased to visit Bonmarche, Specsavers, the Red Cross and Joy’s favourite café (Seasons) where I had the best cup of cappuccino ever but was disappointed there were no Eccles cakes!

We also visited what I believe maybe the world’s first dementia friendly fish and chip shop where they are recreating those innocent days when eating fish and chips out of real printed newspaper was allowed by printing news safely on health and safety approved paper.

Everyone we met was infected with enthusiasm, from the passers-by who tried to get into the photographs, to the man who was so impressed I had trusted a resident of Eccles not to run off with my I phone as he took a picture of us!

Yvonne from Bonmarche emphasised how many of the new clients have dementia and, for example some people can sometimes forget their money or try on different shoes by accident which can lead to some comment from others.

Jean from Spec savers said that many older people came in for eye tests and they can sometimes be distressed. Having a person from the individual’s family in the assessment (which does not happen routinely) and spending more time (an hour as opposed to the usual 20 minutes) has been very beneficial for some people.

Being dementia friendly is good for everybody. We know that lacking in confidence is a key symptom of dementia and there is a fear of going out that people can become very isolated as a result.

Knowing there are places where people will be welcomed if they forget something mitigates the negative feelings of this experience.

If you want to know more about becoming a dementia friendly community please let me know and I will be pleased to put you in touch with people who know what they are talking about – alistair.burns@nhs.net 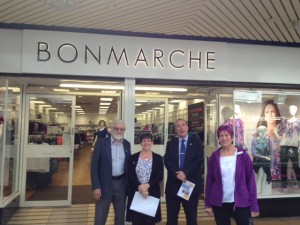 Joy and Tony Watson with me and Yvonne outside Bonmarche