Kirstie Stott contemplates whether our own vulnerability hampers the way we work in the NHS:

Having not blogged for some time now, I have been waiting for the moment when something really inspired me or when it captured me emotionally. I’ve just had that day!

I attended the funeral of a beautiful and amazing 15-year-old boy called Adam Bojelian.

I had met Adam through Twitter; he was a young man who captured my inner child and also who epitomised why I have spent my life working in the NHS.

Adam had complex health care needs and had spent the last 18 months in hospital expressing through poetry, tweets and blogs how it felt to be him. Adam tragically died from Sepsis. 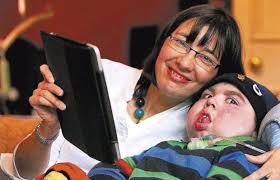 The funeral was heartbreaking. I am quite an emotional person but I don’t think I truly prepared for how hard it would be.

As the hearse arrived to collect Adam’s beautiful casket from his parent’s home, where most people had gathered, I felt the real sorrow begin. We walked behind the car to the church where people paid tribute to him in words, song and music. We then walked to where he would be laid to rest. As I threw soil and my single rose into his grave I sobbed whole-heartedly both in loss of Adam and as a parent, watching his wonderful parents say goodbye.

On the return walk to his home I was walking ahead of my friends when I felt someone put their arm around me. It was Adam’s Grandma. As I returned the gesture and put my arm around her, I was taken aback at the compassion she displayed towards me in her time of need. I was truly touched by this moment and it is one that will live on with me. As we walked the country lane back to Adam’s house, she told me stories about Adam and her family, we both cried together.

What struck me was the vulnerability we both shared in those precious minutes. We both laid bare our emotions for each to see and I believe because of that, we made a connection albeit brief that will live on with me always.

This has made me think about how, as humans, we often avoid feeling vulnerable. I mean, who wants to feel open to criticism, rejection, embarrassment and shame? Who wants to be seen as a weak person for having feelings?

I was quite happy to ‘let it all out’ and be comfortable in front of my peers to express how I was feeling; being at a funeral gave me the OK that it’s acceptable. But what about day to day work? What about as a manager or clinician or senior leader? Is it OK to express vulnerability? What about in the boardroom? What about in a consultation with a patient or service user?

Vulnerability for me doesn’t just mean showing your emotions, it also means showing you care, showing you’re afraid, or unsure or don’t actually know or have the right answers. I wonder how many times things have not gone right due to fear of showing vulnerability?

We only have to look at the landscape of health and social care today to see we are all vulnerable. Who has the answers? Who is afraid to say they don’t, that actually the NHS is in our hands yet we don’t know if we can safeguard it for our children?

We work in the National Health Service; we see it each day in the public we serve, we often unknowingly create vulnerability for people. It’s all around us, but I wonder if we embrace it enough?

A friend who attended Adam’s funeral, coincidentally sent me a link on Twitter today for Brene Browns TED talk – on the power of vulnerability. If you haven’t seen this already I would suggest a viewing, it’s fantastic.

Brene talks about us being hard wired to need connection to give us purpose. That being vulnerable leads to a fear of disconnection and unworthiness. She talks about allowing ourselves to be really seen, being authentic, letting go of who we should be and being who we are. I wonder how many of us take our true authentic selves to work, and if we don’t, why not?

Brene also talks about having the courage to be imperfect, being compassionate to ourselves first and embracing vulnerability. She suggests that by doing this, we open ourselves to joy, creativity and happiness. She even made reference to our vulnerability making us beautiful. I would agree, it shows who we are when times are challenging, we open up to show that we are human, that we are all people, after all. Isn’t that what the NHS is about – people?

I wonder what we can learn and take from her work in the NHS. If, by embracing our vulnerability, we could remove some of the fear we feel as clinicians, as managers and leaders when we’re making important decisions, when we don’t know the answers but are too afraid to say. When we’re afraid to speak out about poor care because it will leave us ‘vulnerable’, could it even save a life? Who knows?

So after a day of reflection about Adam, myself, and the NHS I’ve realised it’s OK to be vulnerable, and to believe in yourself, your true authentic self, to be who you are.

What I also realise is that actually this is what I admired most in Adam: he was himself, he had no reason not to be, and because of this, he opened himself up to happiness and self-purpose through connection. He made me think about his courage and chance taking, he put himself out there, and it worked – people admired, respected and loved him for it.

Kirstie Stott is an NHS Graduate Management Trainee (GMTS) 2012 Cohort. She originally trained as a registered nurse in 1998 and worked in a nursing capacity for 14 years.

She started NHS life as an Accident and Emergency nurse in 2001 and went on to be the youngest national Emergency Care Practitioner for Yorkshire Ambulance Service working to a senior clinical level.

She is a certified Neuro Linguistic Practitioner after successfully gaining a place on the INNOV8 Accelerate Programme.

In 2011 she beat off 12,350 applicants to gain a place on the prestigious NHS GMTS. Her first placement was at Sheffield Teaching Hospital as an Assistant General Manager working on the integration of two directorates. She then spent 9 weeks working at The Faculty of Medical Leadership and Management developing business cases and strategy planning where she is now regional lead for the FMLM steering group in the north.

Her final placement is at South West Yorkshire Partnership NHS FT as a strategic planner leading on the Integrated Business Plan.

Her passions are in equality and diversity in the NHS and understanding and working towards removing the barriers that stop women and BME staff achieving senior leadership positions.

She also is currently regional lead for NHS Change Day 2014 Yorkshire and Humber.

She lives in Sheffield with her partner and 2 children. Outside of work she enjoys music, and being the best mum and having fun with her 2 boys.