For the first time members of NHS England has been represented at London Pride as members of the Lesbian Gay Bisexual and Transgender plus (LGBT+) staff network took part. The move marks a celebration of NHS England’s commitment to LGBT+ equality, diversity and inclusion. Siobhan Clibbens reports on the day: 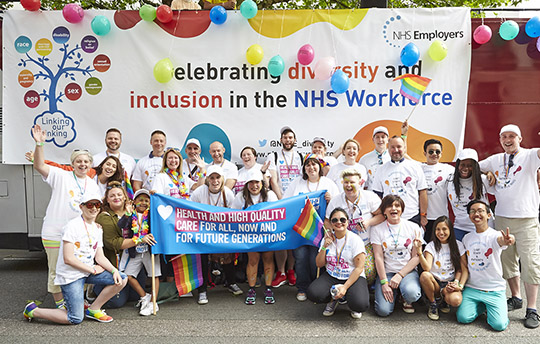 I was one of a group of around 30 people from NHS England and NHS Employers, together with friends, family and allies, who took part in Pride in London.

The official tally counted more than 40,000 people in the parade, and a crowd turning out to watch that numbered in the hundreds of thousands.

The atmosphere as we walked the route was joyful, supportive, and, given the turbulence of the recent days and weeks, an unexpected but incredibly welcome balm to the soul.

I’ve attended a local Pride march almost every year since I came out to my family at 23 – on a Pride weekend as it seemed appropriate to start the way I meant to go on. And, as I moved around a lot in my twenties, I’ve been to Prides up and down the country: London, Edinburgh, Glasgow, Leeds and Birmingham.

Pride means different things to different people, and can mean different things too as you get older and your priorities and passions change. For some people, it is about visibility – a demand to be acknowledged; for some, celebration of the multitudes that our communities contain. For others, it’s our most high-profile opportunity each year to protest and agitate for continued change, here or in other parts of the world, and especially to highlight injustice for people who cannot speak out for themselves.

Whatever else it is, it is always an opportunity to be, unapologetically, your most out and proud self. The beauty of Pride for me is that it encompasses all of those things at once.

Over the years, I have marched with local community groups, with my LGBTUA+ network at university, with Amnesty International, with Stonewall. I have never, before this year, marched with an employer, but as one of the co-chairs of the LGBT+ Staff Network here at NHS England, I have been coordinating our efforts to appear formally under our organisational identity for the first time this summer at Leeds, Manchester and London Prides.

As anyone who has known me for more than a few hours has probably found out, I am a third-generation NHS staff member. I’ve been working in the health service on and off since I was a teenager, and will have been at NHS England for three years at the end of this week.

My parents are nurses who went into clinical leadership and management roles; my grandparents on my dad’s side were nurses before them. My extended family contains care workers, nurse consultants, a clinical psychologist, and a lecturer in adult nursing. Being born into the NHS – in more ways than one – has been a foundational part of my identity since long before I figured out my orientation.

My colleagues and I on the LGBT+ Staff Network Executive Committee here have been very focused for the past few months on the logistical side of Pride, especially London as it is the biggest and the first one on the calendar.

We had t-shirts and a banner made up with our NHS England corporate identity; we organised briefing packs and emergency plans for those people who were coming to meet us; we linked in with NHS Employers in order to walk alongside their float. Despite all of this, I’m not sure I really thought about what it was going to be like to walk all the way down Regent Street, down Pall Mall, past Trafalgar Square and onto Whitehall, bedecked in rainbows as standard but, for the first time, wearing NHS insignia.

So what was it like? It was incredible. I can honestly say I’ve never experienced anything like it.

As a non-frontline NHS staff member, I know – in the abstract – that we work for a service that is beloved by the public. Saturday took that way out of the abstract for me. I’m not sure how to really convey how it feels to walk down a street lined with people as far as the eye can see and have people applaud, and cheer, and chant “N! H! S!” in your direction, other than to say it was jubilant and delightful.

It was electrifying. It was energising. I was proud to be an out member of the NHS workforce before we moved off Portland Place and down the parade route, but that was nothing to the joy I felt once I had spent an hour basking in the warmth and esteem of the people lining the streets.

I’m hoping I never come down from this feeling. I would recommend it whole-heartedly to everyone, and I’m so glad to have had the opportunity to do this alongside my friends and colleagues.

This was only our first Pride event as an organisation. If my colleagues on that march feel the same way I did – and I think they did, given the tweeting we were all doing on the day – I would have thought it’s the first of many years we’ll be in attendance.

If you’d like to come along and experience this for yourself, we’ll be at Leeds Pride on Sunday 7 August and Manchester Pride on Saturday 27 August. You can join the network, and sign up to walk with us, by emailing us at england.lgbt@nhs.net. All are welcome.

Siobhan Clibbens has worked with NHS England for three years, starting in the corporate PMO, supporting the Strategy Programme Board, moving to the-then Policy Directorate in the Partnerships team.

Siobhan is the inaugural co-chair of the LGBT+ Staff Network at NHS England, alongside Oli Mansell, a post she has held since September 2015