NHS England and Improvement’s National Improvement Director looks at how Twitter can help to share learning and improvement across England:

Having the ability to connect with, learn from and share with people who lead improvement across England is a big priority.

And Twitter chats are one of the key ways to make connections with the audience we seek.

I took up the post of National Improvement Director for NHS England and NHS Improvement on April 1 2019, coming from a health and social care system in Northern Ireland which has many differences to that in England. So being able to learn from improvement leaders across England is important to me.

Having tweetchats is one of the key ways I’m seeking to make those vital connections. A tweetchat is a virtual conversation about a topic that takes place on Twitter at a set time, usually for an hour. Anyone who has a Twitter account can join; you just follow a specific hashtag.

I held my first tweetchat on 20 May. The topic was “What does the National Improvement Director need to know about the improvement work that’s currently ongoing across England?” The hashtag was #Improve4Patients. Four questions were discussed: 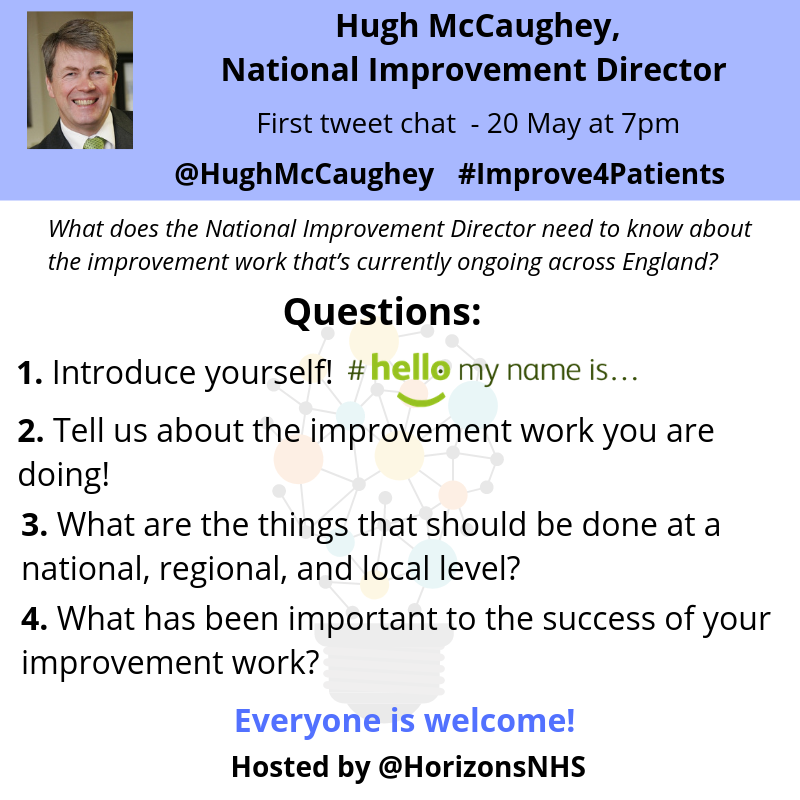 Before the tweet chat, my team used social media analytics to identify people who could support the chat, maximise the conversation and learning. These people are known in the social media world as “superconnectors.”

Typically, these superconnectors are not senior leaders in their organisations but they’ve built trust and credibility amongst their peers. They can have significant influence and reach, supplementing traditional forms of communicating.

The superconnectors quickly mobilised hundreds of local improvement leaders to take part in the tweetchat.  As a result, 777 people joined in the tweetchat. They generated 1,991 original tweets and reached an audience of 1.23 million people.

The virtual conversation had a real sense of energy, connection and shared purpose. We pulled out 49 specific ideas from the tweetchat, on topics as diverse as creating the conditions for improvement, co-production with patients and families and measurement for improvement. These are really helpful to me and the senior team in our directorate as we develop plans to embed the improvement approach and culture across the NHS in England.

This graph shows how diverse groups of people were powerfully connected by the tweetchat. The clusters are individuals and accounts that tweet about similar issues. The green lines show that they were connecting with one another during the tweet chat, helping to build a strong improvement community.

This forum offers people the chance to connect and further their knowledge outside of more formal channels. People in the Improvement Directorate were invited to take part in a tweet chat on 19 June: 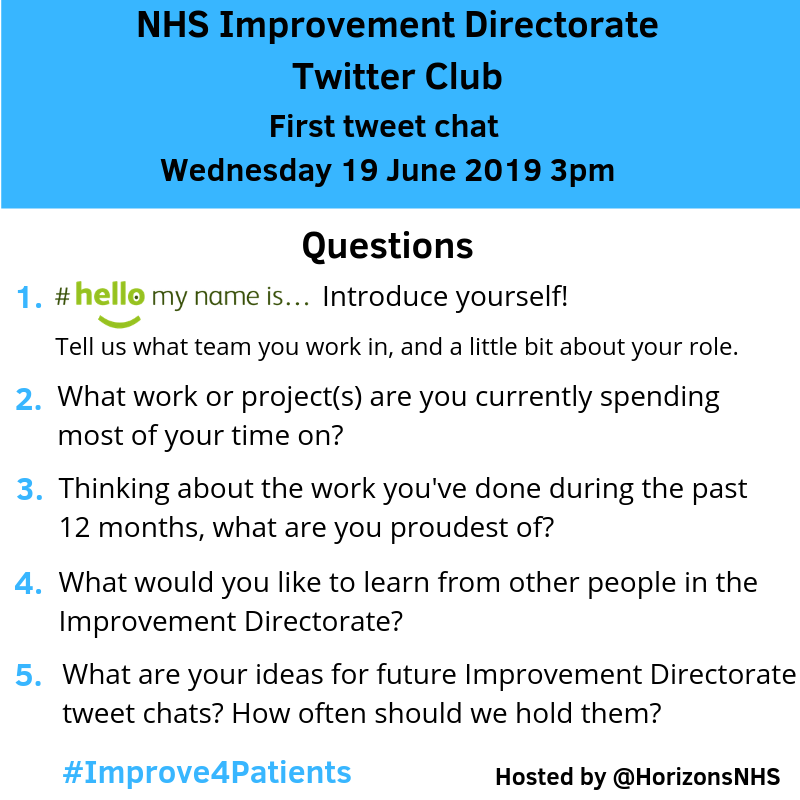 More than 80 people took part, which is a significant proportion of the people in the directorate. They generated 576 tweets in an hour. There were fantastic conversations between colleagues who hadn’t met before. There was a strong sense of people connecting, ideas being shared and everyone talking as peers. Again, we are taking the ideas that came from the tweet chat into the ongoing development of the Improvement Directorate.

Twitter can help to democratise engagement across health and care. We can collaborate and share ideas with people we might not get to meet in person. It is easier for people to participate and offer views and opinions from others. Twitter helps bridge boundaries and mobilise people towards a common aim – it’s about working together and, in our case, how we can spread and embed improvement ideas and approaches more widely.

My next tweetchat is at 7pm on Wednesday 26 June. The topic is ‘How can the system best support the building of improvement skills across England?’ Everyone is welcome to participate. Just log onto Twitter and follow the hashtag #Improve4Patients. at that time. 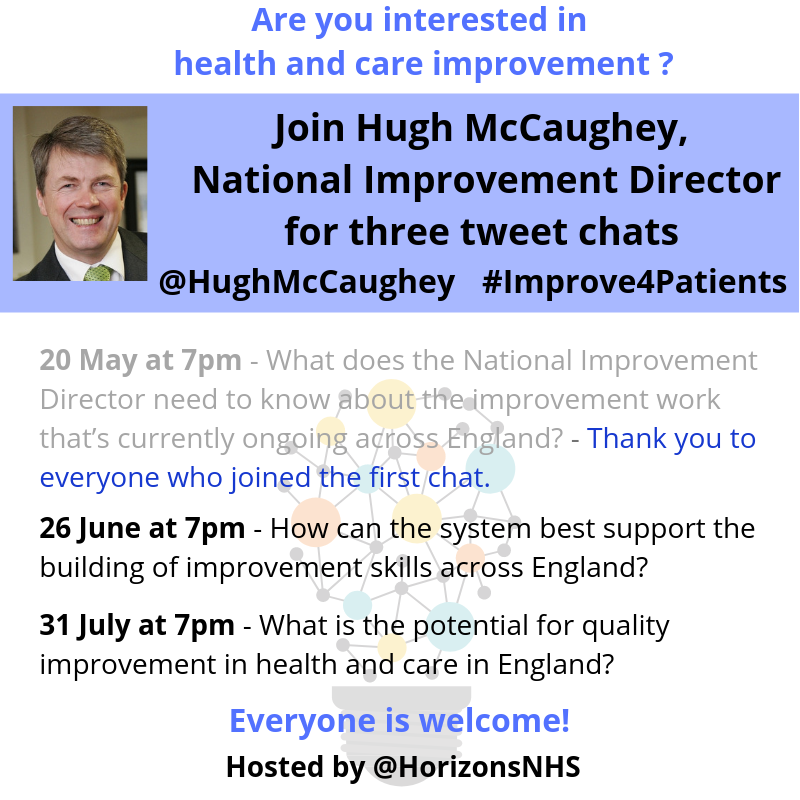 Here is some advice for those who’ve never joined a tweet chat before.

I’ve loved witnessing new connections being made, new relationships forged, and the many lightbulb moments being shared in these tweetchats. I would strongly encourage colleagues in health and care to consider opening a Twitter account, if you haven’t already got one.

I’ve also been able to participate in Nikki Kanani’s tweet chat around primary care networks, which has been really useful and informative.

Oh, and keep using the #Improve4Patients. hashtag when tweeting about improvement topics so that thousands of other people can potentially pick up your tweet.

Hugh McCaughey is National Director of Improvement in the new NHS Executive group.

He oversees the delivery of high impact support to the NHS to help reduce unwarranted clinical variation, improve quality and access, and ensure the most effective and efficient use of resources.

Hugh started in this role on 1 April 2019; previously, he was the Chief Executive of South Eastern Health and Social Care Trust in Northern Ireland from 2009, where he made quality improvement a key strategy.