For Specialist Cardio Thoracic Physiotherapist Megan Gregory, getting involved in the Culture and Leadership Programme was the chance she’d always wanted to work alongside people from different disciplines and develop her own leadership and quality improvement skills. 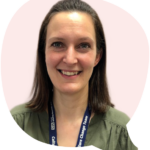 “Each person brought their unique understanding, so the group represented all the different parts of the trust and you could see how they all fit together.”

I’ve been in the NHS for a long time and I’ve always struggled with the fact that we tend to work in silos. I’m an inpatient-based therapist so I work for therapies, but in my mind I also work for the thoracic and cardiac surgical teams. And what the surgical teams and the therapy department want from me doesn’t always align. So for a few years I’d been interested in getting outside of those silos and doing something trust wide. When I heard about the NHS England and NHS Improvement Culture and Leadership Programme, that seemed like the perfect opportunity.

At the first meeting, the change team told us about the different phases of the programme and the improvements other trusts had seen in areas like mortality rates, and we created visual boards setting out our vision of how we’d like our trust to be. From that first day I could see how exciting it would be. Usually, I’m thinking about my day-to-day work in my service, and suddenly I was thinking about being involved in something that could affect the whole trust.

I found that the approach of involving a ‘diagonal slice’ of people across the organisation really helped join up the dots for me. Now, I was working alongside people from the across the trust and our partners in the community – all sorts. Each person brought their unique understanding, so the group represented all the different parts of the trust and you could see how they all fit together.

I helped canvas opinions of staff across the trusts through interviews, focus groups and trolley dashes (catching people on the ward during their work shift). It was fascinating working alongside people from the estates teams, as they knew all these little offices around the trust where we could find people whose voices are not often heard. This was really important – as everyone has a valid opinion about culture and leadership.

Working in this way, we got far wider and more varied opinions than if we had gone through the normal channels.

One finding was that although staff worked well together inside their own teams, interaction between different teams was less successful. Another was that a lot of staff weren’t familiar with the trust’s stated visions and values, although these had been relaunched earlier that year. Another common theme – particularly for ward nursing staff – was that they got a lot of performance feedback when things were going less well, such as if they didn’t hit their targets, but when everything was fine their work was not acknowledged.

One of my tasks was to interview some of the board members. A lot of people think the board are quite removed but I was quite surprised that they were very familiar with what was happening on the shop floor. They were not only happy to talk to us but wanted to ask us about our views too. I’ve spoken to them about other things since then – I can’t imagine I’d ever have emailed a board member in the past!

All the information was presented to a trust-wide event at a hotel in Nottingham. The research feedback was presented like a TripAdvisor report. People sat at tables and watched a role play and then we facilitated the groups to think through how we could all move forward in the way we worked. At the end of the event, everyone pledged to make a change that would improve the culture of the organisation. It was really inspiring.

The next stage was for the leadership and organisational development team to develop the strategy for the board – and then the pandemic hit. I thought Covid might put our culture change work on hold but actually it’s been a catalyst that has accelerated our work. It’s really broken down boundaries between teams. For example, as a physio I did nursing shifts on critical care and that gave me a different perspective on things. And there was an ethos of ‘we’re in this together’. Hopefully, once we put our transformation strategy in place, and get our policies changed, we can keep hold of the progress we’ve made and things will continue to feel better.

We’re all one team

The programme isn’t finished and so far, there’s still quite a divide between the clinicians on the frontline. For example, each team protects their own area – if they need beds for their patients then they will prioritise that need. But I think among the staff working on the front line all the time, things feel different. It feels nicer – much more like we’re all one team.

Being involved in the programme – making those links and working in a wider network – has definitely improved my confidence. Today, I know a lot of people in the trust who I would never have met before. That’s helpful, even if you just want peer support from someone who’s not too close to your situation. The role also has had wider advantages – it enabled me to get a place on the QSA fundamental improvement training and I was asked to judge a category in the Team NUH awards which is also really nice.

The skills I’ve learned have also made me much more self-aware – for example, in how I influence my team. I’d like to think I’m relatively aware how my behaviour has influenced the culture of my team and ideas of what’s acceptable – simple things that you might not otherwise think about on a daily basis.

One of the biggest and busiest acute trusts in England, employing 17,000 staff. A teaching trust, each year it provides services to over 2.5 million residents of Nottingham and the surrounds and specialist services to a further 3-4 million people from neighbouring counties.