Take on a new challenge

If retirement feels like it’s still a few years away yet, and you’re not sure you’ve reached your full potential, maybe a new role with extra responsibility could be a good next step – and a promotion could give your pension a nice little boost too.

To give colleagues an idea of how delaying retirement and taking a promotion could affect pension benefits, we have set out an illustration below which shows how benefits change over time. Details of the contributions that members have to pay to be part of the NHS Pension Scheme are available on the NHS Business Services Authority website.

For our illustration, we’ve used an example of an “Officer” member of the NHS Pension Scheme who was age 55 on 1 April 2022 (and so has both 1995 section and 2015 scheme benefits). They are currently at band 7 (5+ years’ experience) on the Agenda for Change pay scale and get promoted to band 8a over the coming year (but the illustrations would be similar for those not covered by Agenda for Change, too).

The benefits the member may take at 55 and 60 (accounting for any early payment reductions) are: 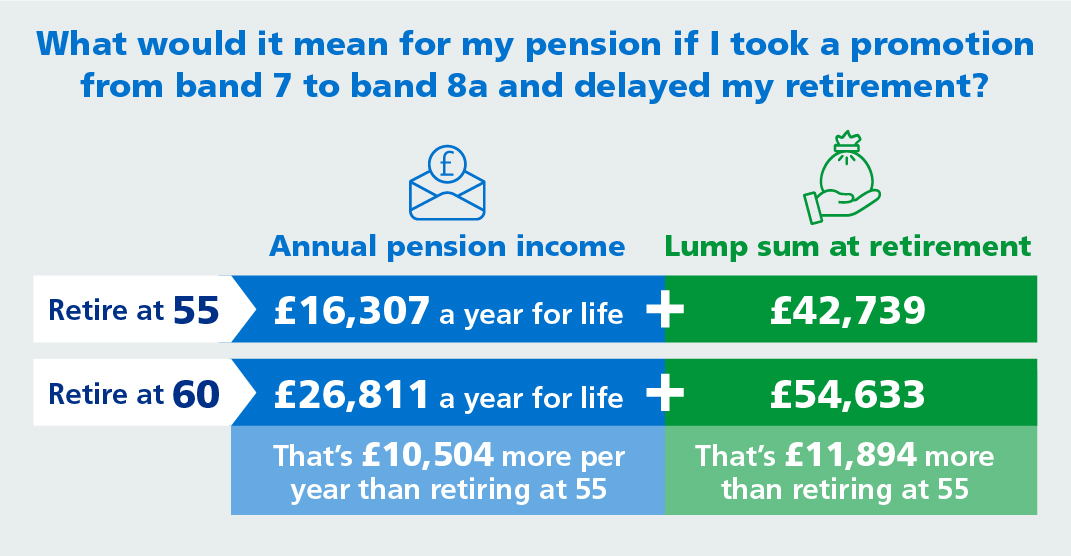 What would it mean if for my pension if I took promotion from a band 7 to a band 8a and delayed my retirement?

See below for more detail:

The benefits the member may take at 55 (accounting for any early payment reductions) are:

The benefits the member may take at 60 (accounting for any early payment reductions) are:

Talk to your manager to find out more about your flexible working options.

See your personal pension details on your Total Reward Statement