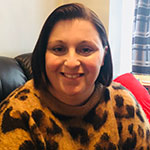 “When we talked about what was important to me I began to realise that I was feeling stuck and wanted to feel like I was achieving something. Working with a health and wellbeing support worker has given my life a better outlook. I am more confident, making plans for the future and making friends.” Victoria, Blackpool.

Living with fibromyalgia left Victoria feeling isolated and not being able to plan for the future. Working with Craig, a health and wellbeing support worker who uses health coaching, Victoria has been able to better manage her condition and its impact on her. She tells us how, by asking her what was important to her and supporting her to manage her condition together, she’s more confident, is making friends and dreaming again.

Before being referred to the Enhanced Primary Care team I felt ‘stuck’. I had been living in Blackpool for 2 years and did not know anyone in the area. Living with fibromyalgia, I did not know how I would be from day to day – I felt as though I could not plan anything. It felt horrible letting people down, so I just didn’t plan anything. I found it easier to distance myself.

This took its toll and I began to suffer with depression. I’d found it very difficult to come to terms with my diagnosis. Not only have I had to learn to manage the pain, but I had to think about how things might look in the future. Sometimes it feels as though I am wearing a mask but underneath I am screaming.

I was referred to the Enhanced Primary Care Service by my GP in May this year. I was introduced to Craig, a health and wellbeing support worker, and we connected straight away – from the first meeting. He began by asking me what was important to me, and I felt he really wanted to help me and work with me to find a way forward. It was really refreshing to work with someone who wanted to look at the impact on my whole life.

Throughout the coaching, Craig encouraged and reminded me how well I was doing, but he also helped me understand what was going on for me. He spent time asking things like “what are some of the triggers for a good day/bad day”; “what is it that makes you happy”; “what happens on a bad day”. This approach really helped me feel better about myself and more able to make some changes.

I began to realise that I was feeling stuck and wanted to feel like I was achieving something. My daughter had just started college, and I wondered if I could do the same. Craig reassured me I could and gave me encouragement. With his help, I completed the application forms, and it all went from there. He also met me and my daughter at the college on the registration day.

I was very nervous because I did not know if I would be able to do it, but once I got there, I found my confidence was growing. I was able to tell my fellow students about my condition and be a little more open about its impact on me. Through this, I found out one of my classmates has the same condition – we hit it off right away and are now very good friends. When I’ve had difficult days I’ve been able to talk with them and get support.

I now feel much more confident, and I’m beginning to dream again and think of the possibilities ahead. When Craig called me a few weeks into my course he was amazed at how far I’d come. I scored ‘1’ in the PAM questionnaire in May, but in November I scored ‘3’. I even competed in a singing competition, in front of 200 people – something I would never have done earlier in the year.

Some of the things that mattered most to me were staying independent and having more in my life than just my health conditions. It was really important that I was allowed to take the lead, and that Craig included me every step of the way. I still have difficult days and sometimes it really feels overwhelming, but now I have more positive days and I am determined to stay as independent as possible. Working with a health and wellbeing support worker has given my life a better outlook. I am more confident, I am making plans for the future and I am making friends. I am also incredibly proud to see my relationship with my daughter in a really strong place.

Craig describes health coaching as a series of smaller steps towards a bigger goal. His top tips are as a health coach are:

Each of these tips reflects some of the key coaching competencies outlined by the European Mentoring and Coaching Council.