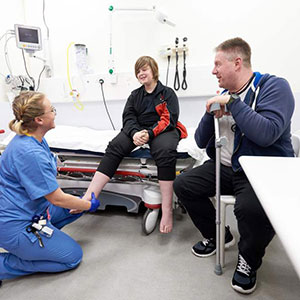 Since April 2017, NHS England has made £105 million of diabetes transformation funding available to improve treatment and care for the 2.8 million adults and children diagnosed with Type 1 or Type 2 diabetes across England.

“The acute trust, ENHT, provided consultant-led MDFT clinics but these are not available every day which impacted on the ability to see the most at-risk patients within the NICE guidance timeframe of urgent referrals being seen within 24 working hours.”

Prior to NHS England funding, the MDFT clinics were delivered at:

The funding received allowed the existing MDFT to be extended to provide a seven day a week service and clinics increased to:

Emily continued: “There was also a need for education to primary care regarding when to refer patients and how to complete a successful foot check as part of the eight care processes.

“The consultant from ENHT has delivered education talks on the diabetic foot at the target days for all areas in the locality including common foot presentations, requirements for a foot examination and an update on the expanded foot service. 332 primary care staff have received this training so far with further sessions planned. A patient satisfaction survey was also introduced to support the service to improve over the lifetime of the project.”

Emily concluded: “This is slightly short of the target of 95%, but still shows a significant improvement.

“MDFT clinics are now being delivered five days a week with weekends covered by the diabetes outreach team and we are thrilled to report that the service is now NICE compliant.”For more information, please contact Emily Byway, Project Manager at East and North Herts CCG on emily.byway@nhs.net.