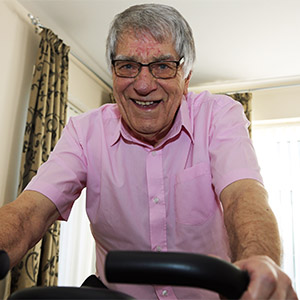 A former television camera and lighting expert from Nottinghamshire is embracing the opportunity to reduce his risk of Type 2 diabetes by increasing the exercise he takes and being more conscious about what he eats.

Derek Constable, who’s 80 and lives in Beeston, signed up to his local Healthier You: NHS Diabetes Prevention Programme after being told by his GP he was at risk of falling victim to the life-changing disease. Just four months in to his ten-month programme, the results have been quite dramatic. Derek has lost almost three stones in weight and he says he feels years younger as a result.

“My resolution to make the change needed to stay healthy is strong,” he said. As well as enjoying the benefits of losing weight and being more active, Derek also wants to continue to care for his wife, who has both dementia and mobility issues.

“When she lived at home, her needs came first, and I lapsed into a diet of ready meals. I was so exhausted at the end of each day that eating properly and taking simple exercise became such low priorities.”

Derek’s wife is now being cared for, and so alongside his daily visits to see her, he has adopted a regime of riding his exercise bike and preparing balanced meals. “I’m quite optimistic that the sugar levels in my blood will have reduced, and I’m determined to complete the programme. Alongside this, I feel so much better already, and I’m much more able to play my part in looking after my wife.”

The Healthier You: NHS Diabetes Prevention Programme is delivered in Nottingham by Ingeus. “It can be challenging to make changes to your habits as you may have had them for many years,” said Ingeus educator Amy Gouldstone.

“However, we aim to give people the knowledge and confidence to reduce the risk of developing Type 2 diabetes. As Derek is demonstrating, the rewards can be great and lead to a much healthier life. His results so far are remarkable and we all congratulate him on achieving them!”