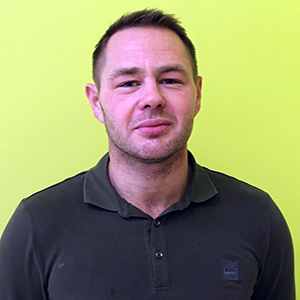 Amputee Mark Joiner now wishes he could tell his younger self to look after his condition properly after losing half of his right foot and, with the support of the Walsall Healthcare NHS Trust’s diabetes service, is on a mission to look after his feet and encourage others to do the same.

Mark explained: “If you had asked me ten years about the possibility of losing a foot because of my diabetes, I would have said “no way, that will never happen to me!”. You convince yourself that it won’t happen to you, but it almost certainly will if you don’t take your diabetes seriously.

“When you’re young you don’t always understand the risks and complications of diabetes. It’s easy to overwhelm yourself with all the things to worry about so I just shut the door on those thoughts and pretended it wasn’t really happening”.

Diagnosed with Type 1 diabetes aged just eight, the now 36-year-old has spent the best part of his life battling the condition, and often, intentionally neglecting it. This was particularly the case throughout his teenage years where he would eat junk food as he pleased and would miss insulin injections; as a result, his blood sugar levels started to spin out of control.

And when he finally began to take his medication properly in his early twenties, Mark started to notice pains in his feet during the night; experiencing burning sensations that would disrupt his sleep and leave him tired for most of the time.

After six months of pain and lack of sleep which led to Mark nodding off both at work and while out socially, he made an appointment to see Walsall Healthcare NHS Trust’s diabetes service which has been significantly expanded in recent years thanks to NHS England funding to improve outcomes for people with diabetes.

The team immediately identified nerve damage in Mark’s feet as result of lengthy hours spent at work without adequate rest. This, combined with inappropriate footwear, meant his feet were completely numb.

Mark added: “The nerve damage was the first real problem as it meant that I couldn’t walk around barefoot as I wouldn’t be able to feel any cuts to my feet, and if left, could lead to serious infection or worse – amputation.”

With medication and orders to take it easy, the pain in Mark’s feet did start to ease and he was finally able to have a solid night’s sleep, giving him fresh motivation to take care of his condition. However it was something as simple as rubbing his foot while on a rowing machine that led to his first serious ulcer.

Despite it healing and some initial relief, that was only the beginning of Mark’s trouble – from sores brought about through inappropriate footwear, infections caught from showering at the gym, to standing on molten metal at work which burned through to the sole of his foot.

Mark said: “I think my foot had about nine lives but none of them were enough to make me learn; I continued to wear what I wanted and resisted resting at work as I didn’t want to look as though I wasn’t pulling my weight.”

Mark started to feel feverish and was referred to Russell’s Hall Hospital in Dudley with an infection throughout his right foot and the need for urgent amputation to the top half of it to prevent this spreading.

“I remember waking up in hospital after the operation and feeling absolutely devastated. The nurse asked if I wanted it covered but I said no, as I knew I had to face the reality of what had happened.

“I knew that there was no more opportunity to be careless as any further infection would mean amputation up to the knee – which was a scary thought.”

After 14 weeks rest and many a DVD box set, his foot healed and the pain finally went.

“It was a massive relief. It sounds strange, but I felt free. My foot had just been full of infection and I suddenly felt well! But obviously I wouldn’t have felt so unwell in the first place if I’d listened to what the professionals had said.

“It would be easy to get frustrated about what has happened to me, but my glass is half full; from now on, I’m making sure to be careful and check in regularly with my local foot care team.

“I am still able to work and drive, but I now wear specially-made boots, moisturise my feet and check them every day for sores or redness.”

And what would he say to people who might not be having regular foot checks or taking proper precautions? “Never miss an appointment – you must put your health first. And when you do have any issues or pain, the sooner that you deal with it the better – act straight away even if you think you’re being a pain because it’s better to be safe than footless!”

The NHS Long Term Plan has made a commitment to a range of services for those at risk of Type 2 diabetes and living with Type 1 and Type 2 diabetes. It recognises that access to diabetes professionals is crucial for optimum treatment and care. As part of this, NHS England is working hard to improve outcomes for those with all forms of diabetes in an evidence-based and sustainable way and £80 million has already been invested in a number of key priority areas including expanding patient access to multi-disciplinary foot care teams (MDFTs) in a bid to help them better manage their condition, like Mark. NHS England’s investment into the MDFT at Walsall Healthcare NHS Trust means that: