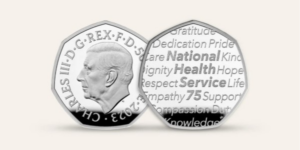 The coin, which is part of a commemorative collection, will raise money for NHS Charities Together which helps the NHS go further for staff and patients.

The artwork for the coin was created by The Royal Mint’s Alice Lediard and features poignant wording which represents the work of the NHS, from dignity and respect to empathy and dedication.

The collection also includes a 50p coin commemorating 75 years since the arrival of HMT Empire Windrush to the UK and celebrates the impact the Windrush Generation has had on the UK, including helping to establish the NHS.

Other coins in the collection mark the 75th birthday of His Majesty The King, the life and work of author JRR Tolkien and centenary of the Flying Scotsman.

The Royal Mint have created a film on the NHS 50p coin and wider collection: